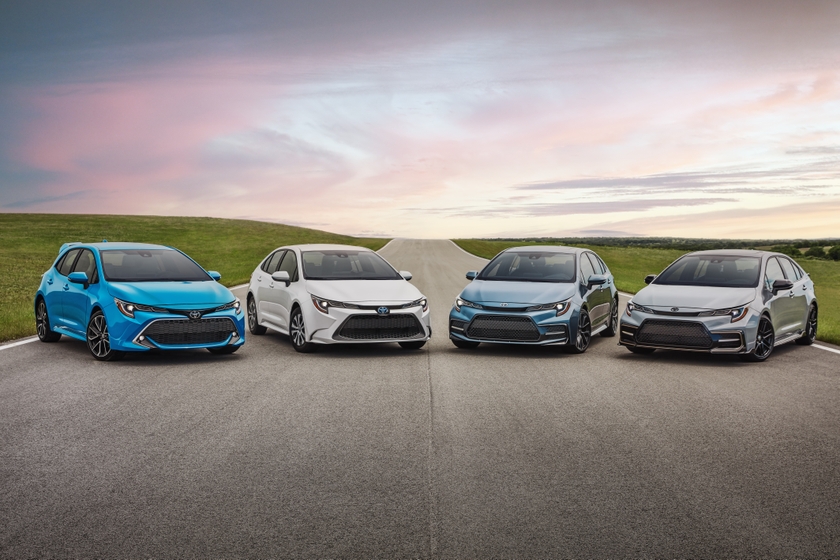 More than 1.6 million of them sold in Canada to date

From a humble start, the Corolla grew to become the world’s best-selling model, and Toyota celebrates this milestone car’s place in automotive history and customers’ lives

This past July, Toyota sold its 50 millionth Corolla, including over 1.6 million in Canada, a milestone not just in Toyota history, but automotive history as well. Now in its 12th generation and over 55 years in production, Corolla remains one of the world’s top-selling vehicles, earning buyers’ confidence and trust one car at a time.

As the Corolla quickly evolved to offer more room, comfort and performance, it became a value benchmark in its class and grew into one of the largest branches in the Toyota family tree. Corolla’s most significant role, however, has been the one it has played in the lives of the millions who have been buying and driving this dependable model for more than half a century.

The Corolla has been making memories and stories for nearly three generations of customers. That adds up to billions of first jobs, first dates, daily commutes,graduations, vacations, doctor appointments, weddings, kids’ ballgames … all the meaningful events that make a life. Even people who never owned a Corolla have a Corolla story to tell about one they remember a friend, neighbour, cousin, or co-worker driving.

Fifty million cars later, this pillar of the Toyota family remains trusted for being well equipped for any situation. For an affordable price, the 2022 Corolla combines advanced tech, sporty style and top-level comfort with great fuel economy and the protection of standard Toyota Safety Sense 2.0 including automatic emergency braking.

Just as it did at the end of the 1960s, Corolla today offers buyers the freedom and independence that comes from its affordability, along with confidence that a car can provide many years of reliable service with low overall cost of ownership. The 2022 Corolla line continues that proud and personal tradition with sedans, a sporty hatchback, a hybrid and the first-ever Corolla Cross compact crossover.

For Corolla, dependability isn’t just about how the car runs, but also describes how it becomes a trusted member of the households it serves. It’s no wonder that a Corolla has long been the start of a “Toyota family,” with other Toyota models soon joining it in many driveways and garages.

Corolla sales were already on the upswing when the October 1973 Oil Embargo set off a chain reaction of long lines and higher prices at the gas pump, and even fuel rationing. The increasing number of buyers who turned to Corolla could be confident that even just few litres in the tank would be enough to meet the needs of the week or more.

Corolla emerged from that downbeat period with even wider and rapidly growing appeal, and Toyota began to add more models, including sporty fastback coupe and liftback versions. Toyota’s steadfast dedication to continuous improvement ensured that every new generation of Corolla offered more than its predecessor.

While the 2022 Corolla may seem light years from its late 1960s ancestor, its core values trace a line right back to that first edition. The Corolla continues to evolve to meet the ever-changing needs of a growing and diverse customer base but has never veered from its mission to deliver renowned Toyota quality, durability, and reliability with high fuel economy at an affordable price. It’s just gotten a whole lot more refined and enjoyable to drive.

Here’s a look at how Corolla got to 50 million… and counting.

The first Corolla was the essence of simplicity, with a clean and crisp design offering generous all-around visibility in coupe, four-door sedan and two-door wagon models. A coupe called Corolla Sprinter with a slightly lower semi-fastback roof line arrived later.

All Corollas had a short-stroke 1,077-cc overhead-valve four-cylinder engine that used aluminum for the cylinder head, intake manifold, valve cover and clutch housing – pretty forward thinking at the time. Wheels were just 12-inch diameter, and the only transmission offered was a four-speed manual. With 60 horsepower (51 hp SAE net), zero-to-100 km/h took over 17 seconds, and the top fuel economy estimate was in the high 20s.

The 1969 Corolla two-door sedan offered reclining front seats and a locking fuel-filler door among other standard features. Attention to detail impressed auto media and customers. Said Car & Driver magazine in a road test: “Not only is the interior well designed but it’s also well finished, right down to the carpet that’s perfectly molded to the shape of the floor with every edge carefully bound to avoid that low-priced look.” 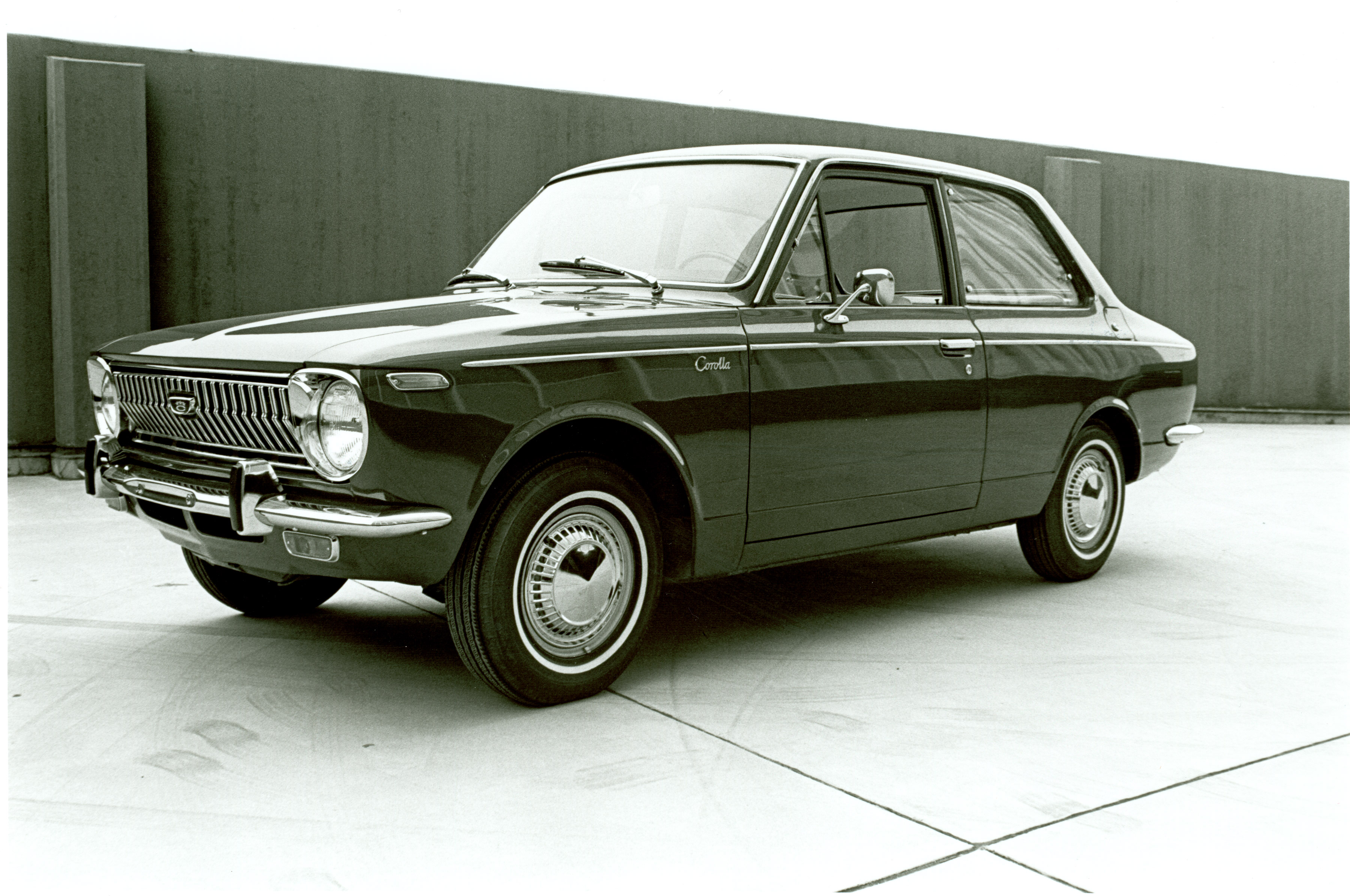 The second-generation Corolla grew in size, with a slightly longer wheelbase, moved up to 73 horsepower and offered Corolla’s first optional automatic transmission, a two-speed. (A three-speed arrived a bit later.) For 1972, an SR-5 coupe featured an 88-hp (SAE net) 1.6-litre engine with a five-speed manual transmission to be a fun companion to the new Celica sport coupe. Corolla had by this time become the second best-selling car in the world. 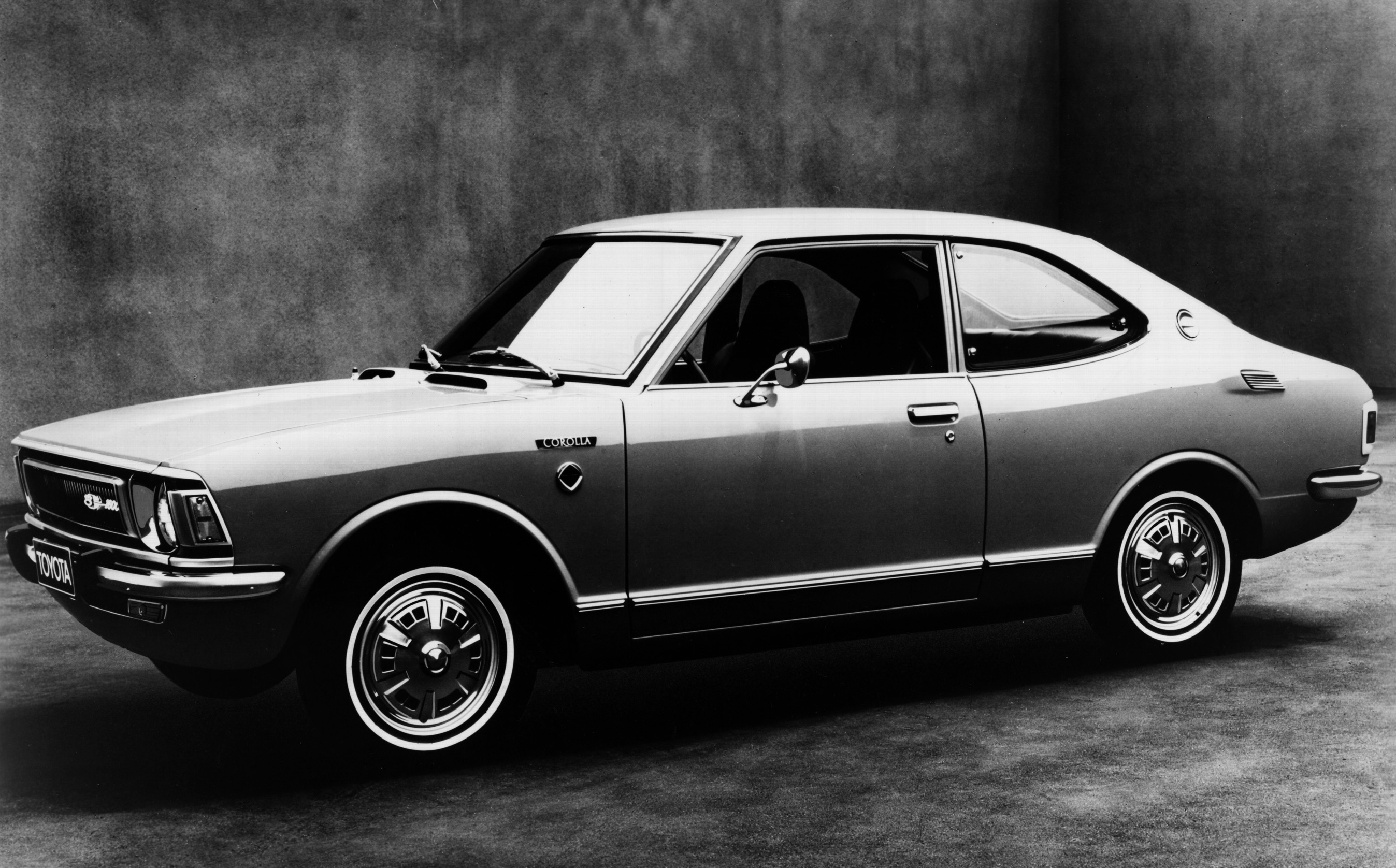 The Corolla again grew a bit in size and offered 1.2, 1.3 and 1.6-litre engines. The line added fastback coupe and Liftback models for 1976, which featured fresh front styling. The Liftback was more like a sport wagon and added rear seat head room, the result being both sporty and eminently practical. 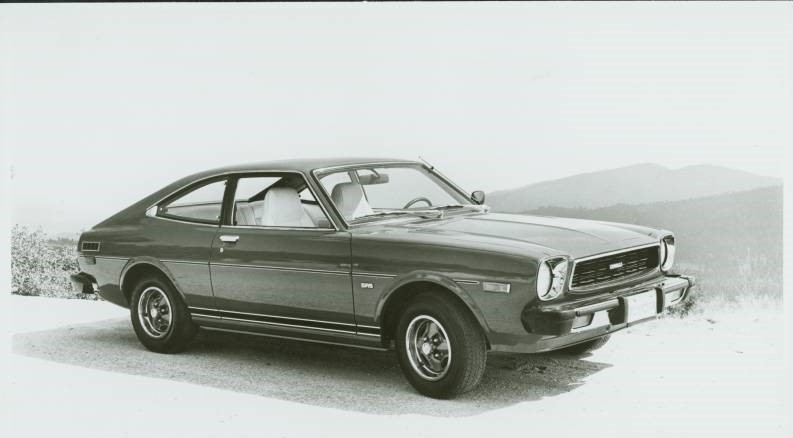 A bold, angular design distinguished the fourth-generation Corolla, which kept its wide range of models. The new design focused on roominess and quietness while adding more amenities. The Canadian model offered a 75-hp OHV 1.8-litre engine and the 4A-C 90-hp OHC 1.6-litre engine. The two-door models were praised for front seats with a “memory” feature that allowed the seats to slide forward to assist with rear seat ingress/egress, and then return to the same position and recline angle. 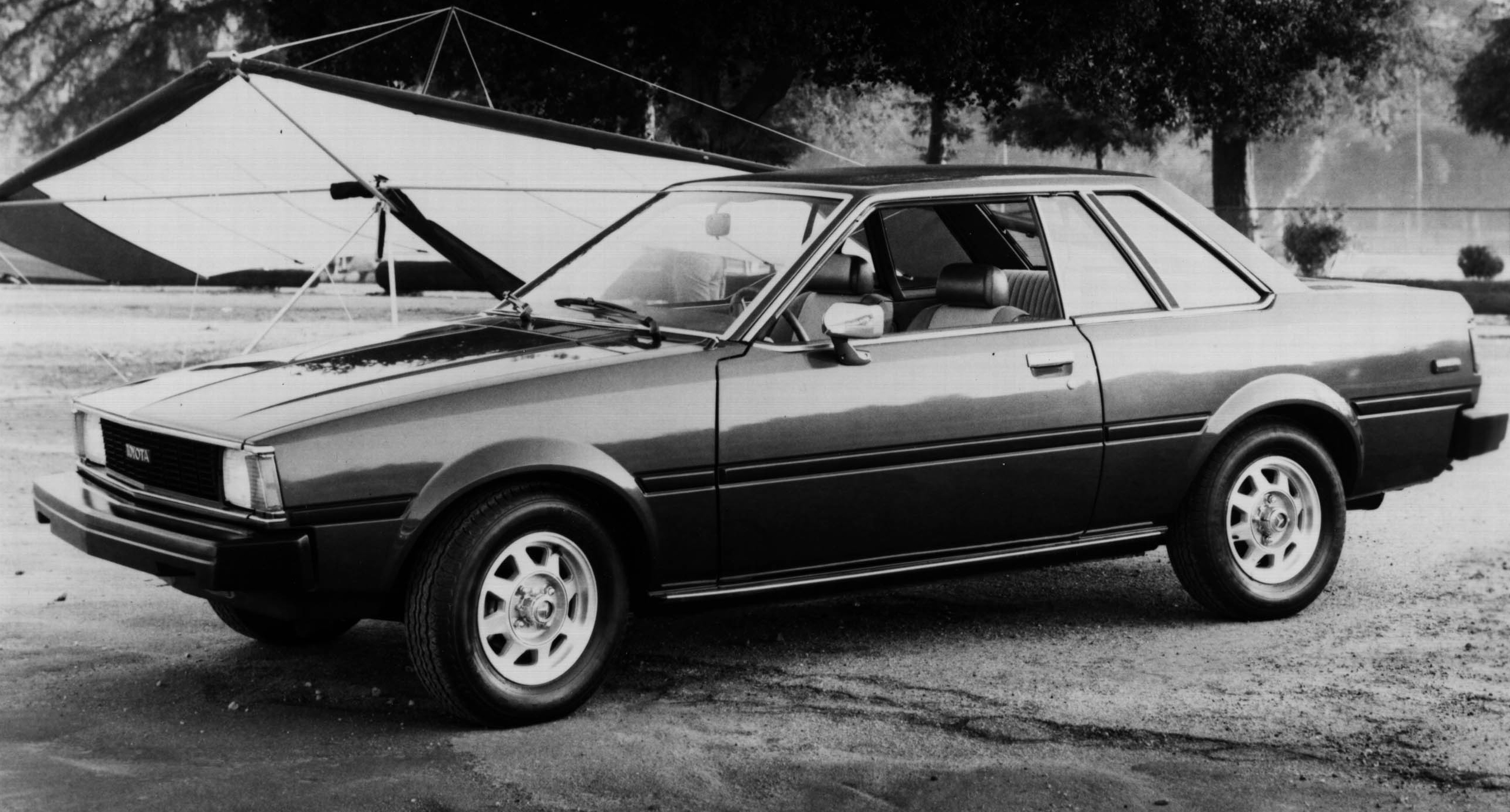 A rear-drive Corolla model, known by its VIN prefix “AE86”came in coupe and hatchback styles. The top GT-S version packed the heat of the legendary 4A-GE DOHC 1.6-litre engine. In 1987, a new front-drive FX hatchback was added, and the top version, the FX16 GT-S, inherited the 4A-GE engine to create a new “hot hatch” model. The rear-drive GT-S would later become a drifting legend, in real life and in video games. The spirit of both those cars continues in the 2022 Corolla Hatchback. 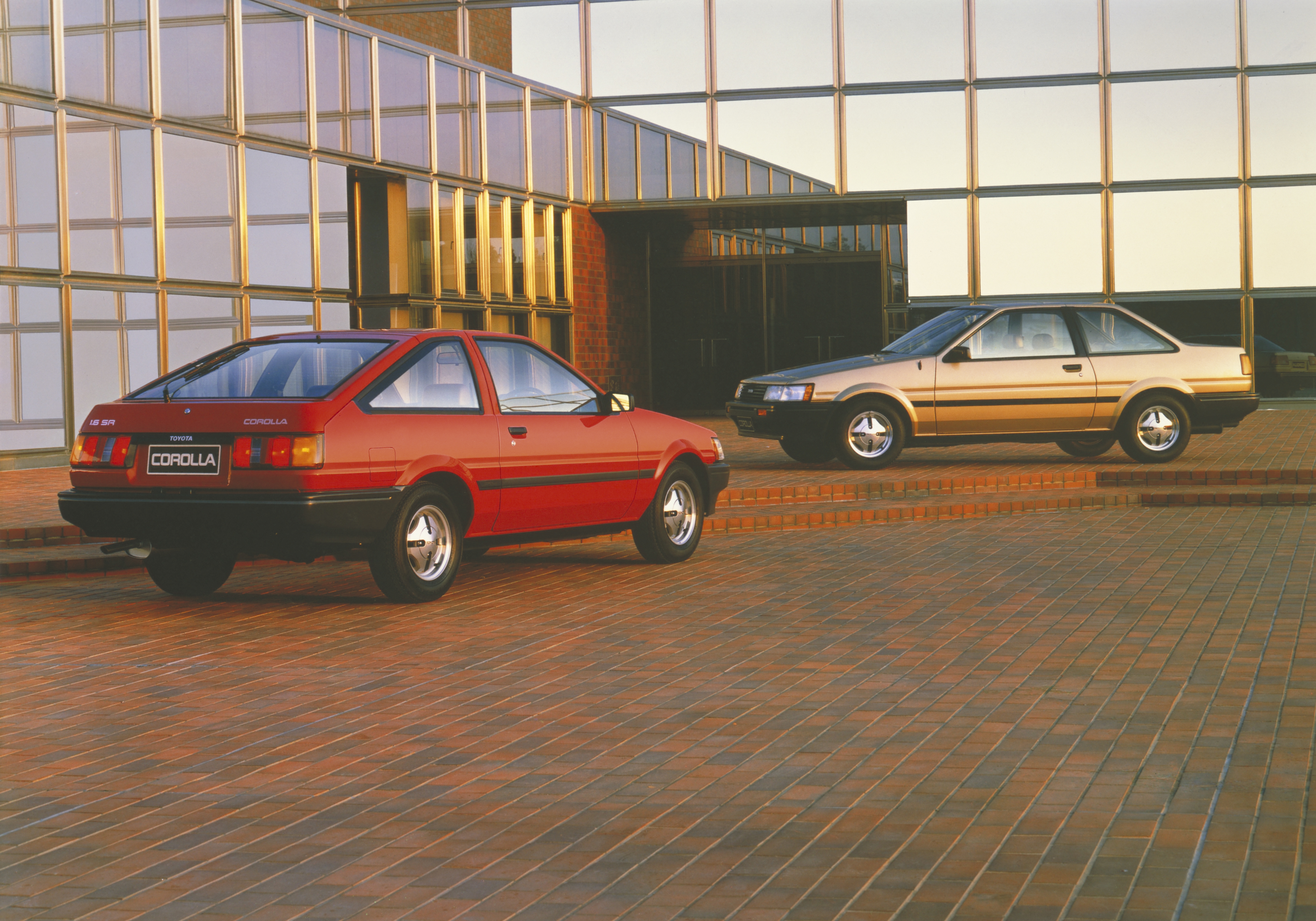 The sixth-generation Corolla line was now all front-wheel drive, with all models powered by 16-valve DOHC engines and featuring four-wheel independent suspension. The Corolla All-Trac wagon and sedan models had an effective all-wheel drive system. The new coupe featured pop-up headlights like the AE86 and came in SR-5 and GT-S models. The latter was quite sporty, indeed, featuring the 4A-GE engine, special wheels and a bold body kit. The GT-S had 135 horsepower in the 1990-1991 version. 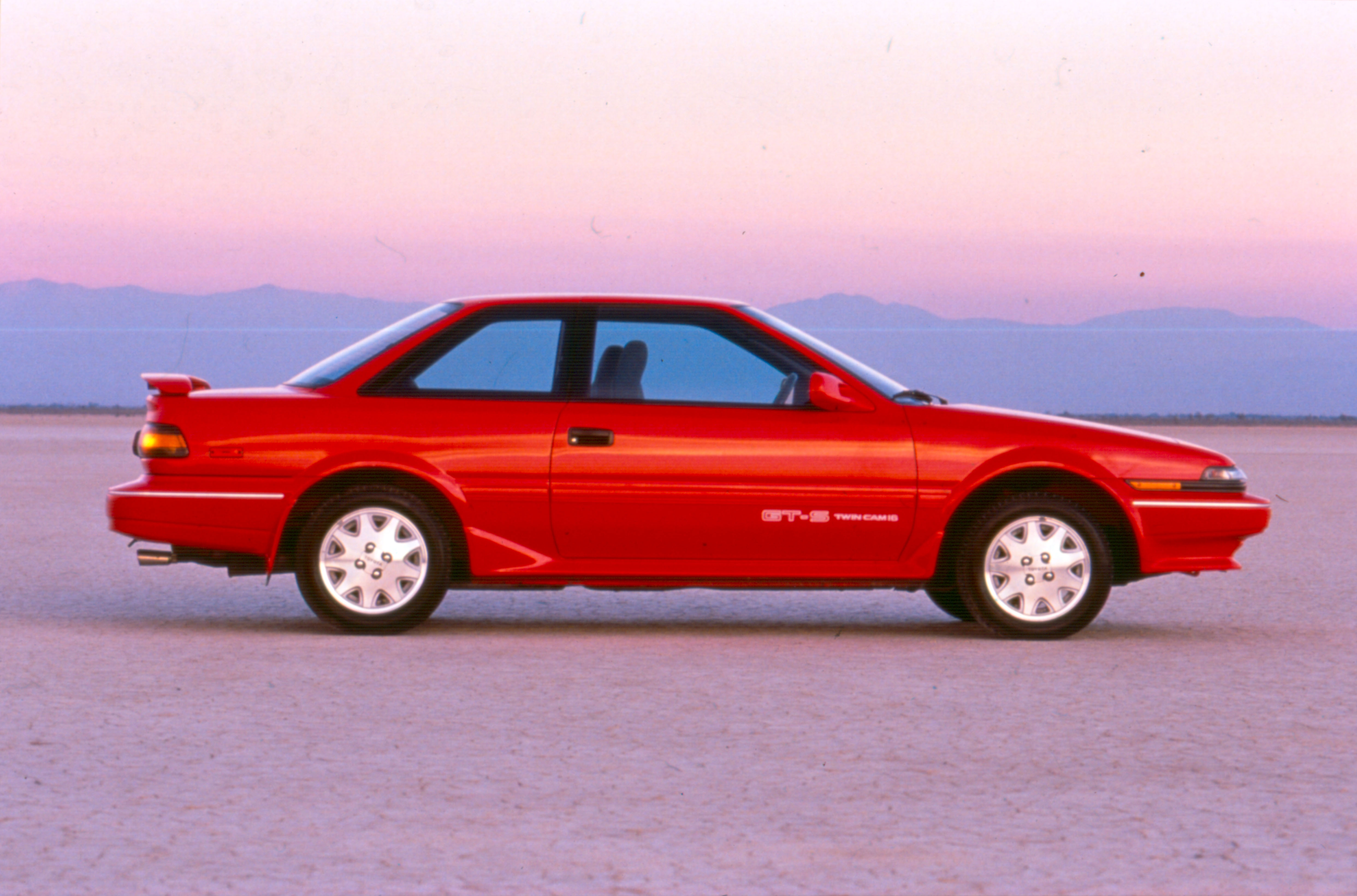 The seventh-generation Corolla, available only in sedan and wagon styles in Canada, became more Camry-like in its design, and in fact moved up in cabin size to the compact segment while the Camry moved to midsize. Both 1.6-litre and 1.8-litre DOHC engines were offered. For 1997, a CE sedan packaged numerous popular options for a special value-priced model. The timing seemed appropriate to celebrate Corolla becoming the best-selling car model in history that year. 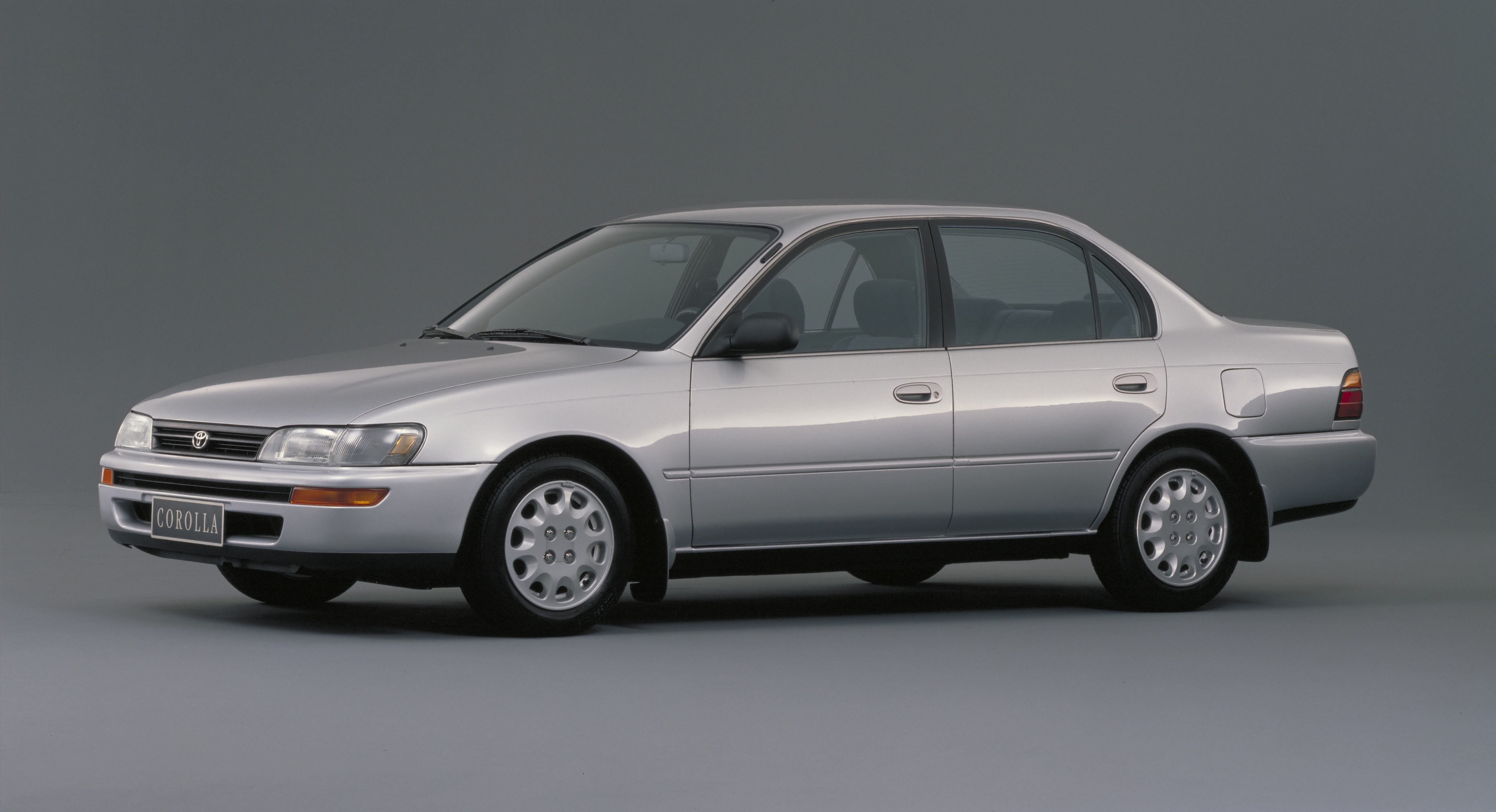 The eighth-gen Corolla improved on the proven formula, with yet more cabin room on the same wheelbase as the previous model. The redesigned unibody improved passenger crash protection and, notably, side airbags became available. A new all-aluminum 1ZZ-FE 1.8-litre DOHC four-cylinder engine debuted the Variable Valve Timing with intelligence (VVT-i) system and made 120 horsepower with higher fuel economy ratings. 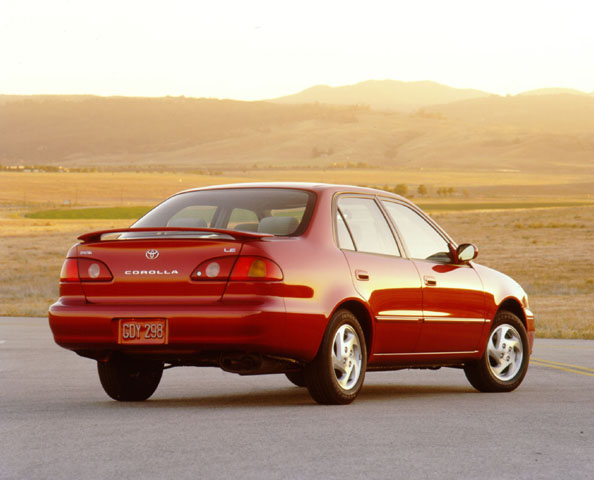 In its ninth-generation, Corolla got a bit longer and taller to create its roomiest cabin ever. A Corolla S model added sport-tuned suspension and special body styling. With its 130-horsepower engine, the Corolla had an NRCAN-estimated combined fuel consumption of 7.4 L/100 km with the five-speed manual transmission and 8.3 L/100 km with the four-speed automatic. As a sign of the times, the centre console box could hold 14 compact discs.

For 2005, the performance-tuned Corolla XRS model combined the high-revving 170-horsepower 2ZZ 1.8-litre engine from the Celica GT-S with a six-speed manual transmission and sport-tuned suspension.

“The levels of fit and finish are nothing short of remarkable,” commented Car & Driver magazine about the ninth-gen Corolla. By 2002, the Corolla had achieved 25 million sold worldwide. 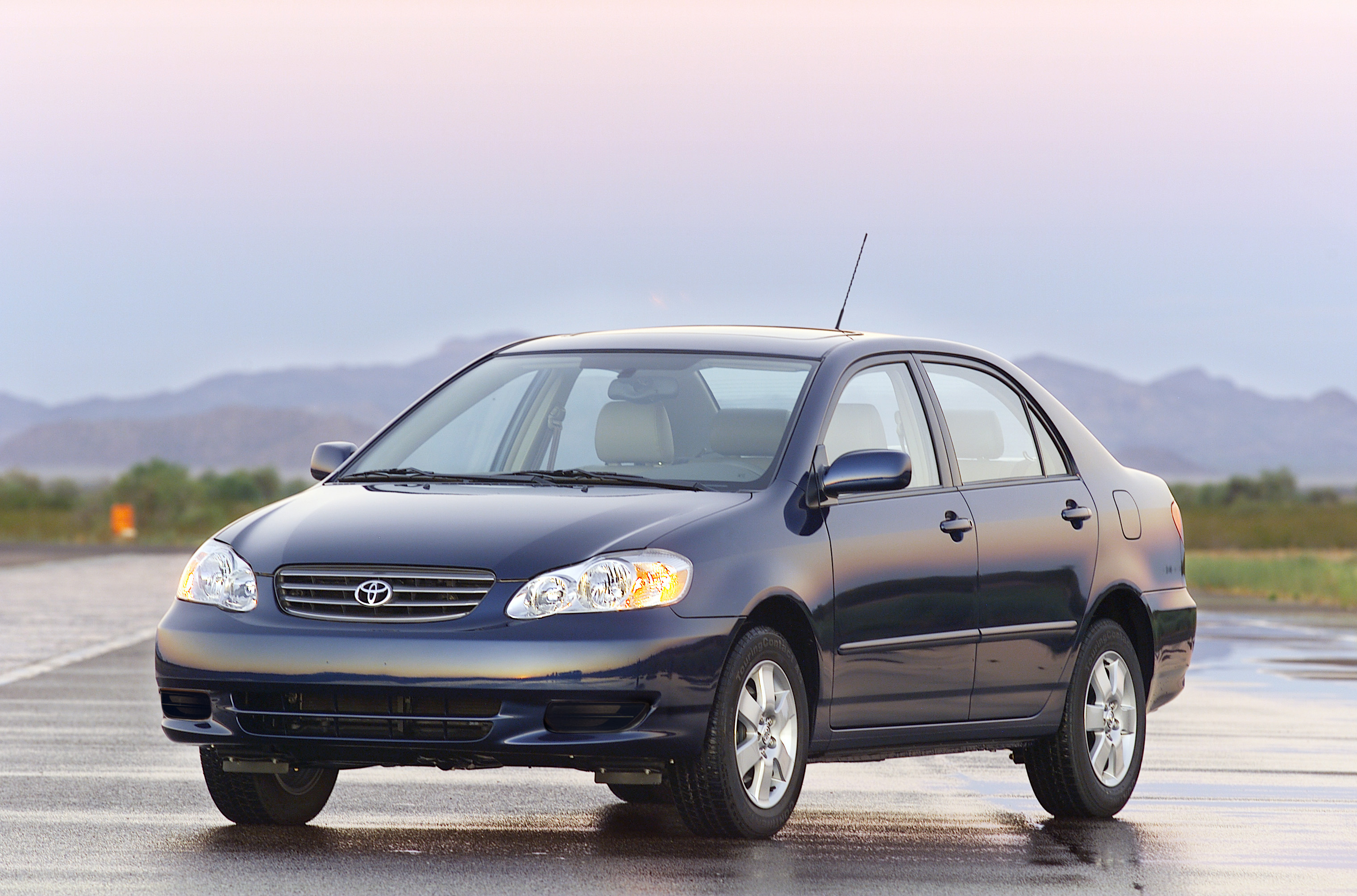 In the tenth-generation Corolla, a multi-faceted focus on refinement resulted in what Motor Trend magazine observed “must be the quietest car in its class, with less wind noise than many luxury cars.” The body had a sleeker look than before and was just as roomy. The XRS model returned, now with the 2.4-litre engine from the Camry for higher torque and greater responsiveness in everyday driving. With CDs beginning to fade, the higher-grade Corolla models offered Premium Audio with iPod connectivity, Bluetooth and steering-wheel-mounted audio controls.

Comfort and tech had become higher priorities for compact car buyers, and the Corolla obliged with the Premium package, which offered an available power moonroof and an audio system with AM/FM/six-disc CD changer, plus navigation, satellite radio and eight speakers. 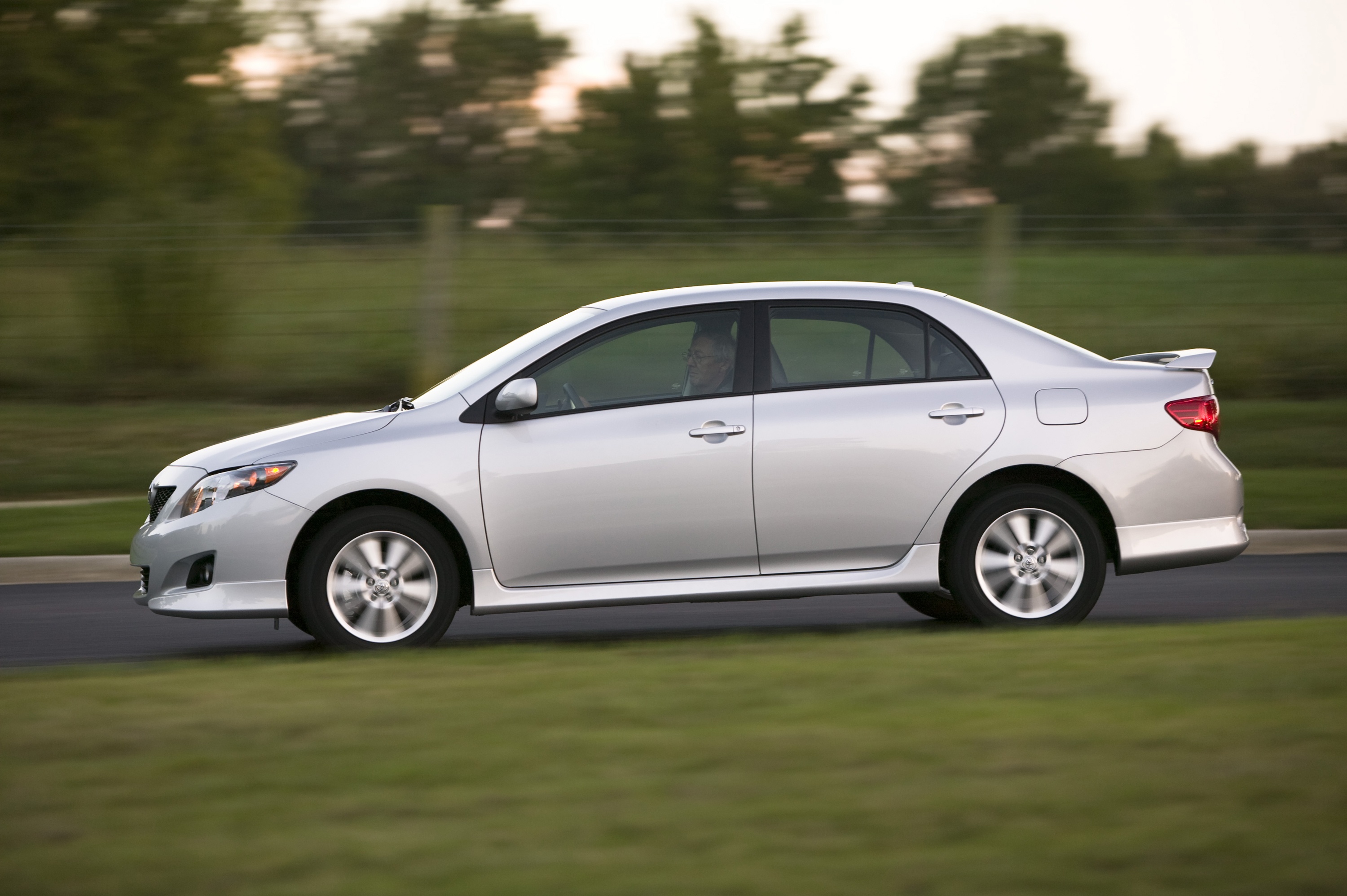 Upgraded interior materials continued the premium feel, and a touchscreen audio system featured Bluetooth, USB and iPod connectivity as standard. Automatic climate control became standard on the LE grade and above. The L and sporty S grades standard with a six-speed manual transmission, while the automatic transmission was now a CVT to boost fuel economy. The Corolla LE Eco model with Valvematic engine technology had a combined fuel consumption of only 6.8 L/100 km. 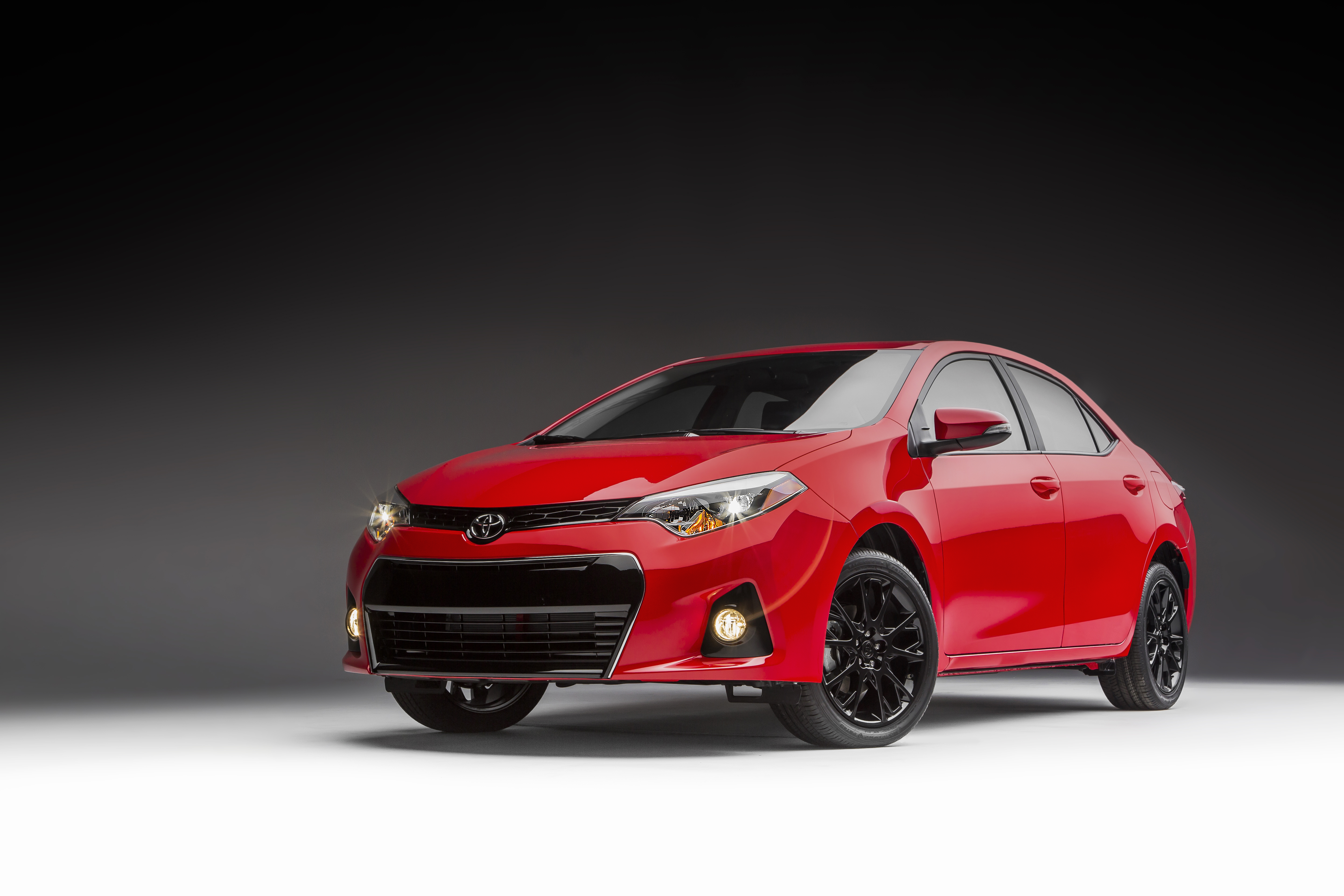 For 2019, a sporty hatchback returned to the line after a long absence. For 2020, the Toyota Corolla line brought a new sedan with a lower, leaner, tauter look. Bigger news: the first Corolla Hybrid Sedan debuted, becoming the fuel economy champ of the line with an astounding NRCAN-estimated combined fuel consumption of just 4.5 L/100 km.

The Corolla Hatchback has a body all its own and channels the spirit of the past Corolla GT-S and XRS performance models, thanks to the 169-horsepower 2.0-litre Dynamic Force engine and rev-matching intelligent six-speed manual transmission. This hot yet highly efficient power plant is also available in the Corolla sedan. And, while the Corolla Hybrid is the line’s fuel consumption leader, the other models are efficiency experts, too, with the 2.0-litre models having an estimated combined fuel consumption of 6.7 L/200 km.

The Corolla Sedan and Hatchback offer a Nightshade Special Edition, an XSE sport model and a luxury flavoured XLE grade. The Dynamic Shift CVT available for all models (except the Hybrid) uses a geared first ratio for a better performance feel and efficiency. The limited-availability Corolla Apex took performance to an even higher level with a bold body kit, track-developed suspension with lowering springs, lightweight 18-inch alloy wheels and a sport-tuned exhaust.

For 2022, the first-ever Corolla Cross joins the line, a new crossover with ample space to tackle the town and generously equipped with Toyota’s renowned comfort and tech features. All Corolla models are built on the Toyota New Global Architecture (TNGA) platform for high levels of agility and safety. And all Corolla models feature standard Toyota Safety Sense 2.0 on all grades.

The Beat Goes On

After 50 million cars, the Toyota Corolla heads into the future offering stylish, agile, quiet, roomy, highly efficient models brimming with the latest tech and safety and ready to write millions more personal stories around the globe. Toyota invites everyone with a Corolla story to share it using #MyCorollaStory.